Uberto Dell’Orto was born and died in Milan. He was initially trained as an engineer, then learned art under Giovanni Battista Lelli, a landscape painter, and Eleuterio Pagliano. He was also influenced by Filippo Carcano. In his figure paintings the main influence was that of the Milanese Scapigliatura. Dell'Orto was also an accomplished draughtsman and etcher.
The years from 80 to 90 were the most productive for the artist, who participated with numerous paintings in the exhibitions of Brera and those of the Permanente. Then he fell ill and a few years later, just forty-seven, he died. 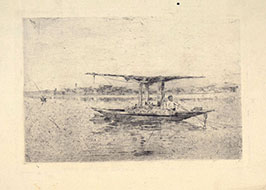