Camuccini first studied under Domenico Corvi. For his older brother Pietro, a dealer and restorer, he painted copies of old masters to sell to collectors and devoted three years to studying the Vatican frescoes of Michelangelo and Raphael. Along with Canova, Camuccini dominated the Roman scene and in the early 1800s became the uncontested premier neoclassical painter of that school. He was elected to the Academy of San Luca in 1802 and twice assumed its presidency. Camuccini maintained a long association with the Vatican beginning in 1803 when Pius VII appointed him director of the mosaic works. In 1830 Pius VII made him a baron. The Catholic rulers of Europe followed the papacy and patronized Camuccini, as did Napoleon and the aristocrats of Rome. Although his reputation was based on his history paintings, Camuccini was perhaps most accomplished as a portraitist; he painted many psychologically penetrating portraits of writers and artists. 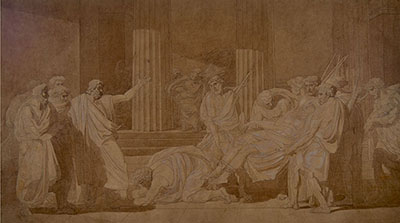 THE BODY OF PARIS RETURNED TO PRIAM
Pen with brown ink, washed in brown