Born in poverty in Cento, near Ferrara, Giovanni Francesco Barberi was nicknamed Guercino (the Squinter) because he was cross-eyed. He was largely self-taught but influenced by the Carracci and in particular by Ludovico. Guercino himself remarks that he was nourished by the altarpiece of Ludovico, Madonna and Child with Saints Joseph, Francis and a donor, in the Capuchin church of the Carmelites in Cento. From 1614 to 1621, the year in which Pope Gregory XV summoned him to Rome, Guercino painted the altarpieces which are his most baroque creations. He was patronized by the papal legate to Ferrara, Cardinal Jacopo Serra, the Bolognese cardinal Alessandro Ludovisi, and Ferdinando Gonzaga, the duke of Mantua. Guercino's religious commissions for these patrons were among the most forward-looking paintings of the decade. With the works of Lodovico and Caravaggio pointing the way, Guercino led the viewer into the space of the painting, adding dramatic light and shadow and greater emotional intensity. Following the example of the Carracci, in 1616 Guercino opened an Academy of Nude in Cento.
When Cardinal Alessandro Ludovisi became Pope Gregory XV in 1621 Guercino was called to Rome. For the pope's nephew Cardinal Ludovico Ludovisi, Guercino produced the ceiling with the Aurora in the Villa Ludovisi, Rome (1621), which is the culmination of his early mature style. For the Vatican Guercino created the immense Saint Petronilla altarpiece. The death of Gregory XV brought an end to Guercino's Roman career and the artist returned to Cento, where he remained until 1642 when he moved to Bologna following Guido Reni's death. During these years Guercino's style evolved from the exuberance of the previous years to a calm, classicizing manner. By 1630, the artist began wholeheartedly to emulate the ideal beauty of Guido Reni and the emotional affetti of Domenichino. He so completely turned to Reni's manner that the latter accused him of stealing his style. Many of Guercino's mature paintings exhibit a dependence on Reni but expunge Reni's ethereality of form for his own down-to-earth naturalism.
Guercino's influence was not far-reaching, probably because his style was so singular and he did not have a real school to carry it on. His paintings were widely collected but his reputation was based primarily on his large graphic output. Collectors appreciated the immediacy and vivacity of his drawings, in which landscape and genre were treated equally with religious and mythological subjects. 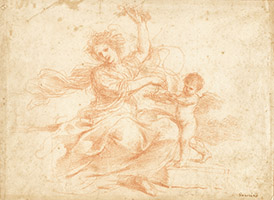