A pupil of Hosoda Eishi,  Eisho was the most prolific artist of prints of women among Eishi's pupils. Eisho's forte was bust portraits of courtesans, and in comparison with Eishi his women are homely and sweet. Eisho’s work is assumed to have been in competition with that of Utamaro, who was known for his vertical okubi-e bust prints in the genre of portraits of beautiful women. Prints by him ceased appearing around 1801, the same year Eishi gave up print designing for painting. Eisho produced few paintings, and his reasons for giving up printmaking are unknown. 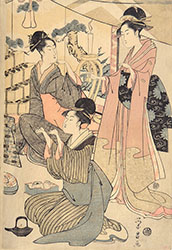