Mario Radice, together with Manlio Rho, Aldo Galli, Carla Badiali and others, belonged to the art group named astrattisti comaschi. He was fascinated by rationalist architecture and was one of the first Italian artists to break from figurative art to join the abstract movement flourishing across Europe at the time.
The Italian painter began his artistic training with the painter Achille Zambelli and the sculptor Pietro Clerici. After a military parenthesis and a job as an accountant for a railway company, Mario Radice attended his uncle Guido Vitali, general manager of the paper mills in Fabriano, and thus became familiar with the qualities of the paper and soon founded the company Mario Radice & C., based in Bergamo. In February 1930, settling in Como and deciding to devote himself exclusively to painting, the artist opened his first studio in Via delle Cinque Giornate, sharing it with Rho. Their fellowship, joined by the younger Giuseppe Terragni, formed the first nucleus of the so-called Como Group, a group of personalities oriented towards the renewal of the arts and architecture, operating between Como and Milan in the name of a fruitful international opening.
Radice worked closely with the most important Italian rationalist architects (Terragni, Lingeri, Sartoris and Cattaneo), reaching international popularity with abstract frescoes done between 1933 and 1936 for the famous Casa del Fascio of Como, a masterpiece municipal building by Giuseppe Terragni for the National Fascist Party. Eventually the frescoes were destroyed at the end of World War II but photographic documentation still exists. His works were shown in nine Venice Biennale from 1940 to 1979, in which he was exhibited in a personal room on three occasions. Like the works of the other founder of the Italian abstractist school, Manlio Rho, Radice's art is recognizable for pure and harmonic geometric shapes in warm colors. 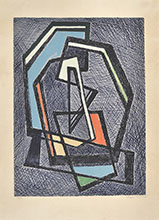