The son of the owner of an antique bookshop, Petrucci manifested his interest in art and printmaking as a boy, browsing books and folders of prints in his father’s shop. From 1902 to 1914 he worked in the foundry of an uncle, cultivating his artistic sensibility by molding, finishing and patinating the castings. In those same years he attended the studio of Antonio Mancini. In 1907 he exhibited for the first time a few drawings and pastels and in 1911 won a prize with his etching Vento e Sole. In 1926 he was commissioned by the Ministero della Pubblica Istruzione to prepare the catalogue of the Regia Calcografia in Rome, which was published in 1934 (the second edition in 1953). From 1928 to 1935 he collaborated with L'Enciclopedia Italiana compiling all the entries on printmaking. The same he did later for the Enciclopedia Universale dell’Arte. In 1933 he became director of the Regia Calcografia, maintaining this prestigious role for thirty years, and promoting the culture of printmaking in black and white with intelligence and sensitivity.
His activity as an engraver and those of a skilled cultural promoter make him, in the thirties and forties, the undisputed authority on printmaking in Italy. In 1943 he was admitted to the Accademia di San Luca and was elected president of the Accademia in 1955 and 1962. Petrucci was also a member of the Consiglio Superiore per le Antichità e le Belle Arti from 1952 until 1958. In his long activity as an etcher Petrucci participated in the most prestigious exhibitions and cultural events in Italy and abroad. Among the most recurring subjects of his works are the views of Rome and of the surrounding countryside, portraits and many ex libris.
REFERENCE: Fabio Fiorani, Carlo Alberto Petrucci, in Gruppo Romano Incisori Artisti, exhibition catalogue, Rome, 1988. 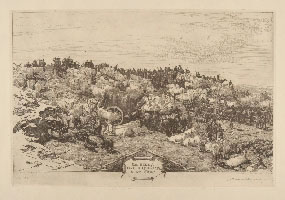