The engraver, draughtsman and painter Conrad Martin Metz was born in Bonn between 1745 and 1749. He studied in London at the Royal Academy, where he became a pupil of one of the founder members, Francesco Bartolozzi. It was under him that Metz became a highly proficient engraver of classical and religious subjects, eventually moving to Rome (where he died) where he undertook the hugely ambitious project of producing a large-scale engraving in fifteen plates of Michelangelo’s Giudizio Universale. 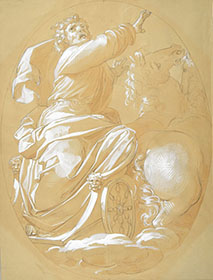 THE ABDUCTION OF ELIJAH INTO HEAVEN (2 Kings 1:23-10:8)
Pen, washed, heightened with white