Mario Cavaglieri was born in Rovigo, into a  wealthy Jewish family whose native town was Venice. He initially studied law at Padua University but soon abandoned his studies for training as a painter and by the age of 20 he was already holding exhibitions of his work. In 1911 he went to Paris because he wanted to broaden his artistic knowledge and was very impressed with the colour themes of the Fauve artists. His use of colour increased in a very personal way. His main period of activity was between 1913 and 1920, and he was particularly active in portraiture. In 1925 Cavaglieri moved to France where he purchased the maison de Peyloubère in Pavie, only leaving for a period during the war when, as a Jew and an Italian, he felt a vulnerability which led him back to his roots and family. So  he moved back to Italy, but his family was deported and forced to sell the house until his return to France in 1946. From then on Cavaglieri alternated between Paris and Pavie, holding onto the house until his death. His first retrospective was organized by the Musée des Augustins in Toulouse in 1974, whilst in 2007 his birthplace of Rovigo organized a major international retrospective at the Palazzo Roverella. 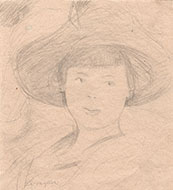