Born in Naples, Umberto Prencipe grew up moving to various cities due to the work of his father, a prison manager. When the family settled in Rome he enrolled the Accademia di Belle Arti and also studied under the Russian artist Klavdij Petrovi? Stepanov (1854-1910). Leaving the Accademia in 1900, he decided to devote himself exclusively to the landscape painting and, in 1904, he made his debut at the Roman exhibition of Amatori e Cultori. The following year his painting Clausura, also exhibited at the Amatori, attracted a lot of interest and was purchased by the Roman Galleria Nazionale d'arte Moderna.
In 1905 Prencipe moved to Orvieto, where he remained until 1910 dedicating himself mainly to printmaking. He developed his own particular form of crepuscular symbolism, expressed in evocative landscapes, always devoid of human figures. From 1913 to 1917 he lived in Lucca, where he taught Engraving at the Istituto di Belle Arti. But he did not stop exhibiting: he took part in Secessionist exhibitions in Rome and, in 1914 he opened a personal exhibition in Florence. In the years following the war he returned to live in Orvieto. From 1926 he lived in Rome and in 1932 he became professor of Engraving at the Accademia di Belle Arti in Naples, a position he held until 1936 when he was transferred to the Accademia in Rome to teach the same subject until 1949.
In 1937 Prencipe was elected a member of the Accademia di San Luca and in 1946 virtuoso del Pantheon; specimens of his fine prints are kept in the Uffizi Gallery. In 1950 the Calcografia Nazionale organized an exhibition of his works. 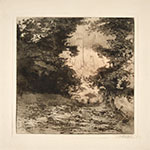