Said to be a pupil of Tatsumi Shuei, Gakutei then studied with Hokkei and was strongly influenced by Hokusai. Gakutei's first illustrations to popular fiction appeared in 1815, and the following year the first of his surimono, in which genre he would become a leading designer during the 1820s and 30s. He was also an important author and illustrator of popular fiction. Gakutei made visits to the Osaka/Kyoto region in c. 1818-20 and 1831-2; in 1836 was living close to the Kamo River in Kyoto and in 1837-9 in Osaka. The most famous product of his time spent in Osaka is the folding colour-printed album Naniwa meisho Tenpozan shokei ichiran (Selected Views of Mt Tempo [Park], a Famous Place in Osaka), published in 1834. 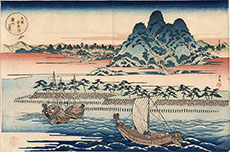 A VIEW OF MT. TEMPO FROM THE AJI RIVER IN OSAKA. OSAKA CASTLE VISIBLE BEYOND THE WATERFRONT AND ROOFS OF TOWN
Colour woodblock print