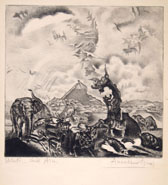 USCITA DALL'ARCA (The Exit from the Ark)
Drypoint