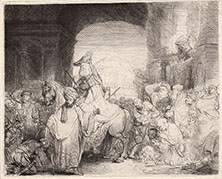 THE TRIUMPH OF MORDECAI
Etching with drypoint