Landscape painter and successful engraver, Crescenzio Onofri was one of the closest pupils and assistant of Gaspard Dughet, with whom he collaborated on the canvases painted for the Throne Room of Palazzo Doria-Pamphilj in Rome. Onofri worked for about 20 years in Rome, participating in the decoration of the residences and palaces of the most illustrious Roman families. In addition to the Pamphilj, he worked for the Pallavicini, Rospigliosi and Colonna. The fresco decoration of four rooms in the Theodoli Palace in San Vito Romano, near Rome, was particularly successful. Later he moved to Florence (c. 1690) where he worked until his death for the court of the Grand Duke Cosimo III. Several paintings of him in the possession of the Florentine Galleries testify to his long period of service with the Medici. 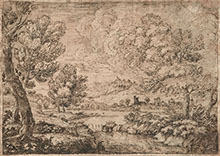 LANDSCAPE WITH CREEK IN FOREGROUND
Pen and brown ink, RESERVED