The son of the landscape painter Carl Vinzens Moser, Carl Moser attended courses at the Munich Academy. After the Academy conclusion he went to Paris where he attended the Julian Academy and made acquaintance with the art of the Nabis. His stays in Brittany are central to his artistic training. In Douarnenez he met Henri Rivière, an admirer of Japanese art. In France Carl Moser discovered and learned the technique of Japanese colour woodblock prints. Back in South Tyrol for financial problems, Carl Moser developed the Japanese technique learned in France, creating beautiful color woodblock prints in Bolzano. 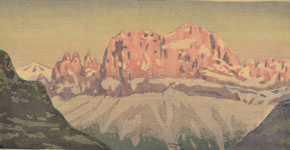