Sabatelli was the most talented of the Tuscan painters of the generation after Pietro Benvenuti. He was born in the house of Marchese Pier Roberto Capponi, in Florence, while his own father was in domestic service there. The Marchese Capponi was Sabatelli's early sponsor, financing his education at the Florentine Academy and his sojourns in Rome and Venice. In 1808 Luigi Sabatelli was appointed to the chair of painting at the Brera Academy in Milan. There he remained over forty years, although he continued to carry out commissions in Tuscany. During his mature years, Sabatelli established himself as a decorator and fresco painter, with numerous public and private commissions. Sabatelli was a fine painter and one of the premier pre-romantic draftsmen of nineteenth century Italy. He was also an accomplished etcher. See Beatrice Paolozzi Strozzi, Luigi Sabatelli, disegni e incisioni, catalogue of the exhibition at the Gabinetto Disegni e Stampe degli Uffizi, Florence, 1978. 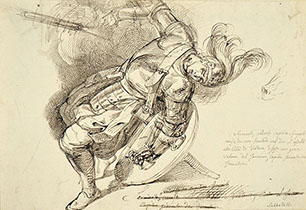 THE DEATH, BY A MUSKET SHOT, OF THE SPANISH CAPTAIN DIEGO SARMIENTO DURING THE SIEGE OF VOLTERRA OF 1530
Pen and brown ink, REDUCED PRICE