Printmaker. Born in Città di Castello, studied with Giovanni Fattori at his Scuola del Nudo in Florence between 1904 and his death in 1908. He made his first etching in 1907. The following year Celestini settled in Perugia where in 1910 he had his first one-man show of paintings and etchings at the Accademia di Belle Arti. With the help of Lodovico Tommasi and the short-lived Carlo Raffaelli, whom he soon succeeded as director, he set up the Scuola d'incisione all'acquaforte in the Accademia di Belle Arti in Florence in 1912. This, the first school for printmaking in Italy, had the use of Fattori's press. Celestini became celebrated as a teacher and many of his students achieved repute for their intaglio prints. He left his post in 1916 when called up to serve in the Italian army.
After the war, in 1919 Celestini resumed his position at the Accademia in Florence. The following year he founded the journal Calcografia and opened a workshop for printing etchings in Florence. Celestini quickly achieved an international reputation for his etchings, being elected to membership of the Chicago Society of Etchers and of the Society of the Salon d'Automne in 1921, and of the Paris based Société Internationale de la Gravure Originale en Noir in 1922. He exhibited regularly in Paris, where he was given several one-man shows. Celestini's 1929 etchings of Brittany belong to the world of Meryon and D.Y. Cameron. That year he founded a school of stage design at the Accademia dei Fidenti in Florence. In the 1930s Celestini was much employed in stage design throughout Italy, while continuing to make prints. London's Brook Street Gallery gave him an exhibition in 1933. Both in his theatrical work and in the compositions of his prints he was indebted to Gordon Craig, the English stage designer and woodblock printmaker, who had worked in Florence at the invitation of Eleonora Duse from 1906, where in 1908 he founded the journal The Mask. From the early 1930s Celestini regularly spent his summers in Anticoli Corrado, south of Rome, a resort often frequented by British and German representational printmakers. His favourite subjects for his etchings were the hill towns of central Italy with their mediaeval buildings huddling together and clinging uncertainly to the precipitous slopes. These townscapes are deserted and their dour appearance is enhanced by the gloomy lighting. Celestini also made lithographs. Unlike most of the other artists in this exhibition the fame of his prints has completely eclipsed his pictures. Celestini painted landscapes and still lives as well as the mediaeval buildings familiar from his etchings.
(Text by Martin Hopkinson) 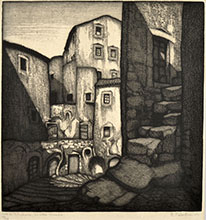 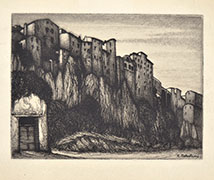 THE ANCIENT WALLS IN PITIGLIANO
Etching