Minguzzi was a sculptor, etcher and lithographer. Son of a sculptor, he studied under his father and at the Academy of Fine Arts in Bologna. He visited Paris in 1934 on a travelling scholarship. His early work was chiefly influenced by Bolognese and Florentine early Renaissance sculpture, Manzu' and Arturo Martini. Again in Paris in 1948, Minguzzi was in the company of many artists such as Guttuso, Birolli, Giacometti and others and widened his knowledge of contemporary art. From 1956 to 1975 he taught at the Brera Academy in Milan where he had transferred in 1951. 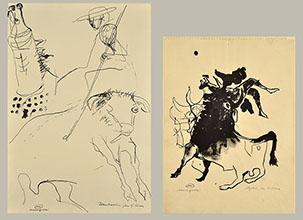 A PAIR OF DRAWINGS: A) PICADOR (Bullfighter on Horseback) B) GORED BULLFIGHTER
Pen and black ink