Born of a French family, Elisabeth Chaplin lived in Italy since she was a child. In 1912 the artist presented her paintings at the Promotrice Fiorentina, in 1913 at the exhibition of Roman Secession, and in 1914 and 1920 at the Biennale of Venice. By the age of thirty, she had already made a name for herself as an artist. Elisabeth Chaplin has moved from the great French painting of the end of nineteenth century, with Nabis reminescences, to later include contributions from the Italian Secession. After 1920, she was influenced by Symbolism: her golden age of mythological and biblical paintings began and went on through the ‘30s, when the artist expressed her vision of the mythological nude through common subjects taken from everyday life. She then started to represent civil life producing decorative tapestries such as 'Summer and Autumn' for the École Professionelle of Metz (1936-37). Apart from these kind of works, Elisabeth Chaplin continued to produce a great number of easel paintings. She drew during her all artistic life. 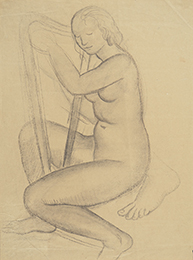