Pietro Testa, one of the most remarkable artists in the circle of Nicolas Poussin, was an enigmatic and melancholic painter active in Rome from about 1630 until his early death in 1650. Around 1629 Testa moved from his native Tuscany to Rome, and remained there for most of his career. He first specialised in making copies after classical antiques and was employed in this capacity by Cassiano dal Pozzo and Vincenzo Giustiniani. He trained briefly under both Domenichino and Pietro da Cortona, and was much influenced by Poussin. Testa was a highly skilled draughtsman and one of the greatest etchers of his generation, but as a painter he met with little success. He was, moreover, a genuine independent, almost in the modern sense, working for himself more than for others and often looking for patrons to whom he could dedicate his prints only after he had produced ambitious and time-consuming inventions on the plate. An ambitious artist with a liking for theory and complex imagery, it was probably his progressive disillusionment at his lack of recognition that drove him to commit suicide by drowning in Rome’s River Tiber. 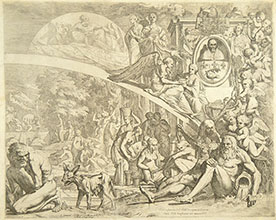