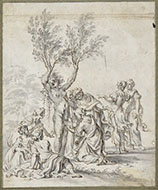 THE BIRTH OF ADONIS
Pen and brown ink, washed in gray, SOLD