A self-taught painter, Crali discovered Futurism in 1925, while a student in Gorizia and took up painting at the age of fifteen. His enthusiasm for flying and his experience as a pilot influenced his art and, despite his youth, he played a significant part in Aereopittura, launched in 1929. In 1932 Marinetti invited him to exhibit in Paris in the first aeropittura exhibition there. He participated in the Rome Quadrennial  in 1935, 1939 and 1943 and the Venice Biennale of 1940. In 1936 he exhibited with Dottori and Prampolini in the International Exhibition of Sports Art at the Berlin Olympics. After the Second World War Crali lived in Turin, where he continued to promote Futurist events. Despite the ending of Futurist movement with the death of Marinetti in 1944, Crali remained attached to its ideals and aesthetic. Between 1950 and 1958 he lived in Paris. He moved to Milan in 1958 where he remained, apart from a five-year period teaching at the Italian Academy of Fine Arts, Cairo. In 1959 he published the first post-war Futurist manifesto Sassintesi (Stone Syntheses). In it he advocated a new form of artistic expression using natural materials - pebbles, stones and rocks formed of various minerals.  His sassintesi were exhibited in Milan in 1961. Crali tried to revive Aeropittura in the late 1960s in a manifesto Arte Orbitale. He continued to paint, sculpt, teach and lecture throughout the sixties, seventies and into the eighties. 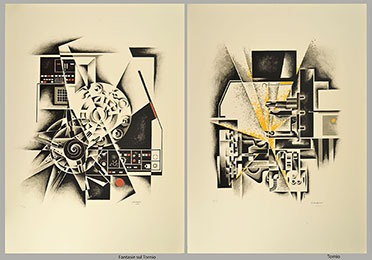