The Surrealist Hans Bellmer, best known for his life-size pubescent dolls, devoted an artistic lifetime to creating sexualized images of the female body—distorted, dismembered, or menaced in sinister scenarios. Born in Katowice, Poland, Bellmer was coerced by his overbearing father into working at a steel factory and a coal mine, even after passing university entrance exams. He began studies in engineering at the Technische Hochschule in Berlin, but left to pursue his interest in art and politics. In 1924, Bellmer worked as a book printer and illustrator at Malik Verlag, where he demonstrated artistic talent and contributed drawings to Dadaist novels. In the late 1920s, he began traveling, and visited several countries, including France, Italy, and Tunisia. With the rise of Fascism and Nazism in the early 1930s, he stopped working as a means of resistance by refusing to provide support to the state; at this point, Bellmer established his artistic career, and began creating the distorted, mannequin-like dolls for which he is best known. Most scholarship has focused on Bellmer's work of the 1930s, especially the infamous dolls and the photographs he made of them, but in truth Bellmer continued to produce, until the 1960s, sexually explicit prints, drawings, paintings, and photographs. A draughtsman, painter, constructor of dolls, photographer, etcher, lithographer and writer, Bellmer was the poet of the erotic obsession; his work scandalized many but made him a favourite of the Surrealists. 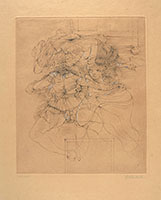