Italy produced a number of families of theatrical designers, among whom were the Galliari of Turin and the Quaglio of North Italy who worked in Austria and southern Germany. The earliest were the Bibienas, who created a new iconography for the stage and spread their style across Europe. The first member of the family to enter the art world is Giovanni Maria Galli da Bibbiena called il Vecchio (1618-1665), a painter, pupil of Francesco Albani. His two male sons Ferdinando (1657-1743) and Francesco (1659-1739) are the first artists of the family to deal with theater sets. The same did Ferdinando’s sons, Alessandro (1686-1748), Giuseppe (1695-1757), Antonio (1697-1774), and Giovanni Maria the younger; Francesco’s son Giovanni Carlo (1717-1760); and Giuseppe’s son Carlo (1721-1787). This family of prolific artists worked so closely with one another that it is often difficult for modern eyes to distinguish each artist’s work. 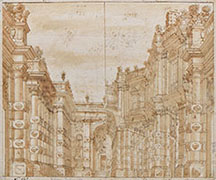