Mario Pieri-Nerli graduated from the Politecnico in Milan: he was an engineer and architect, illustrator and engraver. He soon showed a vocation towards Symbolism and to an architectonic imaginary inspired by the Secession. Pieri-Nerli was one of the main figures at the Caffè Bardi in Livorno, which in the early 20th century was frequented by the artistic avant-garde of the city. He approached to the artists more closely linked to the Symbolism and Divisionism, such as Gino Romiti, Renato Natali and Benvenuto Benvenuti, who converged into the macabre and esoteric genre inspiring other Italian artists as Romolo Romani and Alberto Martini.
See: F. Cagianelli, M. Ratti, F. Sborgi, Mario Pieri-Nerli, 1886-1917, Itinerari del Simbolo tra Livorno e il Golfo della Spezia, La Spezia, 2009 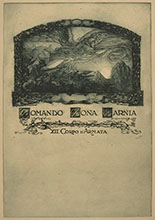