A pupil of Jusepe Ribera in Naples, Giordano enjoyed a long and successful career. After traveling to Rome and the Veneto, Giordano began to move away from Ribera's dark and dramatic style towards a lighter, more decorative manner. He began to develop his light, airy, delicately colored style in the late 1650s, synthesizing Pietro da Cortona's Baroque decorations in Rome with the vibrant hues of Venetian art and Rubens. He was soon established as the leading painter in the city, executing altarpieces for many Neapolitan churches and working at such rapid pace that he was nicknamed Luca fa presto. He also developed a reputation beyond Naples. His foreign patrons included the Grand Duke of Tuscany, Cosimo III and the Spanish King Charles II, who invited the artist to Spain in 1692. Appointed court painter, Giordano remained in Spain for ten years, working at the Escorial and for courtly and noble patrons in Madrid and Toledo. He eventually returned to Naples in 1702 and continued to work with considerable energy until his death. 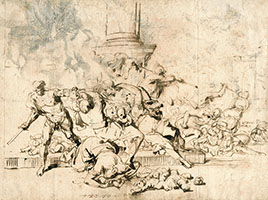