A Belle Époque painter and etcher, Lino Selvatico was son of Riccardo, poet, playwright, and founder of the Venice Biennale. Lino began his studies to pursue a legislative career, but after some years of law school decided to devote himself exclusively to painting. He was a pupil of Cesare Laurenti, and was also influenced by his friend Ettore Tito; he painted mainly landscapes and portraits and was an expert printmaker.
Selvatico started his career in the Third Biennale (1899), exhibiting portraits that met critical acclaim; since then his participation at the Biennale and other important events was extremely active. In 1926, the Biennale had a posthumous exhibit of 45 of his works, and in 1935, sixteen of his works. 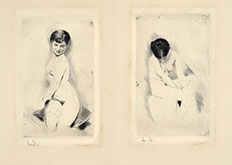