Pietro Benvenuti was the leading neoclassical history painter and portraitist in Tuscany in the early decades of the nineteenth century.  Born in Arezzo, he entered the Florentine Academy of Fine Arts, as a young man. In his twenties, he traveled to Rome where he came under the influence of Antonio Canova and Vincenzo Camuccini (who remained a lifelong friend). Benvenuti took an intensive part in the Roman artistic life: he was a regular guest at the salon of Angelika Kauffmann and had contacts with foreign artists working in Rome. In his Roman years Benvenuti also belonged to the Accademia dei Pensieri, an association of young artists founded by Felice Giani, which met at Giani’s home and whose other members included Camuccini, Luigi Sabatelli and Giuseppe Bossi. After his stay in Rome, Benvenuti returned to work as a painter in Arezzo. In 1807 he was hired as court painter by Elisa Bonaparte Baciocchi and to direct the Florentine Academy of Fine Arts, a position he held until his death. Alongside a group of collaborators and students, Benvenuti was commissioned in 1811 to decorate the new rooms of Palazzo Pitti, where he painted an ambitious cycle of works dedicated to Hercules' stories and exploits. Another prestigious commission, by the restored Grand Duke of Tuscany Leopold II, was to fresco the dome of the Medici Chapel in San Lorenzo, depicting eight great subjects, taken from the Old and New Testament. 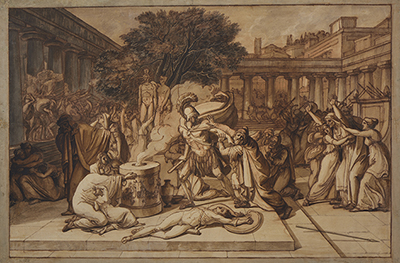