A RARE TRIPTYCH BY HIROSHIGE, WHIRLPOOL RAPIDS AT NARUTO IN AWA PROVINCE

See below the triptych offered by us, originally in the collection of Luigi Ghezzi and exhibited in 1976 in Milan at the Castello Sforzesco (see Gian Carlo Calza, Le Stampe del Mondo Fluttuante, Milan 1976, no 4.23).

Even Ukiyo-e, like other Japanese schools, has maintained a relationship with some canonical themes of classical Chinese art. One of these is indicated by the triad of Snow, Moon and Flowers, (setsu-getsu-ka or setsu gekka) respectively associated with winter, autumn and spring. Also for the Ukiyo-e artists the triad became an opportunity for representations linked to these seasons, in paintings as well as in prints. But, just as the name of the school,  Floating World, was meant as an invitation to pleasures rather than to an ascetic life, as it was in the original Buddhist meaning, so in the late 18th and early 19th centuries, the triad Snow, Moon and Flowers became an occasion to portray the most beautiful and desired courtesans or the life in the Yoshiwara. See here a set of three paintings by Katsukawa Shunsho (1726–1793), and see here a fine example of a print by Suzuki Harunobu (1725-1770) from a similar set.
However, in the early decades of the nineteenth century the development of interest in the landscape led the Ukiyo-e painters to use the ancient thematic triad to depict the beauties of Japanese scenery. Hokusai (1760-1849) depicts the theme in three beautiful prints in horizontal oban format, see here the Moonlight on the Yodo River, having already used it for a series of smaller format prints, Snow, Moon, and Flowers at Famous Scenic Spots, see here the full series, and here the Snow View at Saga, in Yamashiro Province. Also Hiroshige (1797-1858), the other great landscape master of Ukiyo-e in the nineteenth century, was inspired by the setsu gekka triad. See here a fan print at the Art Institute of Chicago, created in the forties, and here at the Museum of Fine Arts, Boston, a snow scene from a series issued in the same years. But certainly the most famous interpretation given by Hiroshige to the Snow, Moon, Flowers theme is that of the three triptychs published, with no title, in 1857, at the end of his career. Late impressions of this set are not known. In the image below you can see the specimens of the three triptychs kept at the Rijksprentenkabinet. Here the links to the single works
Mountains and rivers on the Kiso Road
Evening vista of the eight views of Kanazawa in Musashi Province
View of the whirlpools at Naruto in Awa Province 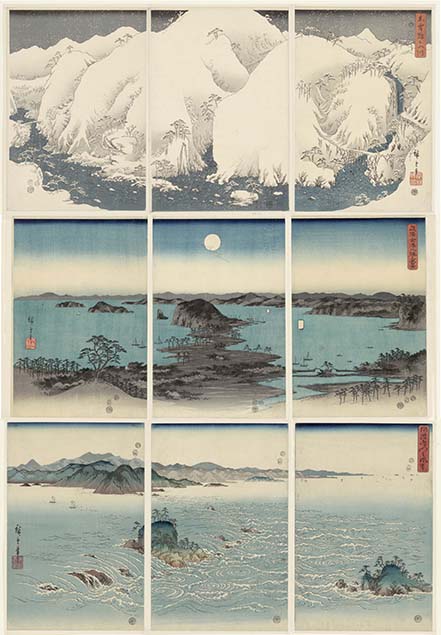