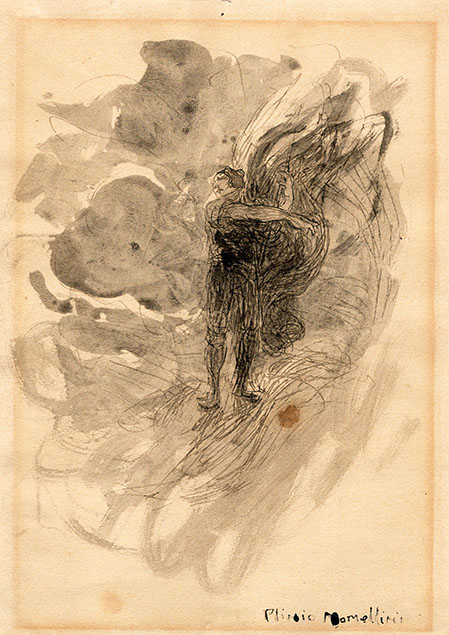 Pen with brown and black ink, washed in grey. Signed at bottom right in black ink Plinio Nomellini. On the verso a sketch in pencil.
253 x 178 mm

After studying in Livorno, Nomellini  received a local grant that enabled him to enrol at the Accademia di Belle Arti in Florence, where he  studied under Giovanni Fattori and became friend with the painters Telemaco Signorini and Silvestro Lega.  In 1890, he moved to Genoa, where he adopted Divisionism. Genoa would be a great source of inspiration for his pictorial compositions, both from its maritime location and also as a result of its condition of social ferment. In Genoa Nomellini developed a marked interest in radical politics. He exhibited a piece inspired by the Genoese workers' strikes at the first Brera Triennale in 1891 and was arrested on charges of anarchism in 1894. His house in Genoa became a meeting place for artists and writers and his painting had an important influence on turn-of-the-century Ligurian Divisionists. In 1902 Nomellini moved to Torre del Lago, the guest of his friend Giacomo Puccini. There he took up Symbolism and was involved in the creation of the 'Dream Room' at the 7th Venice Biennale in 1907. In 1919 Nomellini  finally settled in Florence, although he continued to make frequent visits to Versilia, the coastline around Livorno and the island of Elba.