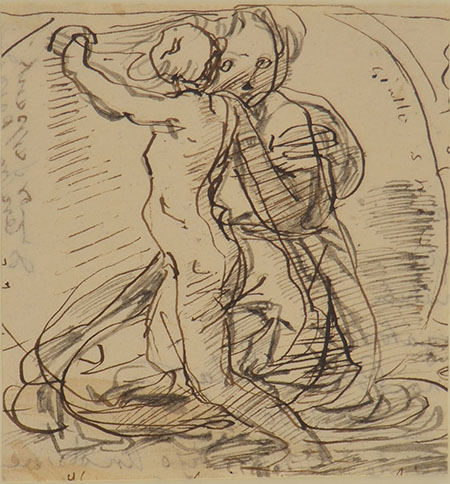 Born and grown up in a small town of the Marches, Duranti studied in Rome, where befriended Tommaso Minardi and was influenced also by Giani and Camuccini. In addition to being an artist, Duranti was a collector and an antique dealer. His life was plagued by both actual and imagined catastrophes. After 1840 he lived in seclusion and poverty in Montefortino, tortured by ill health and his fevered phantasms. Looking toward art of the past, Duranti almost exclusively produced drawings of his inward visions. He reacted against the formalism of Neoclassicism with a simplified and geometrical style of drawing which owes a debt to Lomazzo and Cambiaso. Despite all of these backward glances, for his stylistic singularity and subjectivity, Duranti’s art pointed to the future.