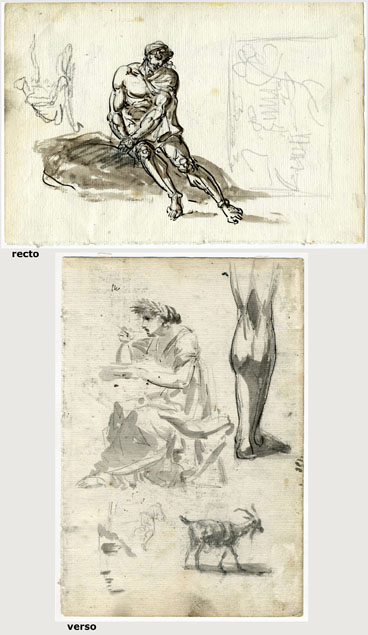 Pen and brown ink, pencil, grey and brown wash; 240 x 162 mm.
The sheet was originally part of a sketchbook.

After first having been apprenticed in Lille, Jean-Baptiste Wicar moved to Paris in 1781, where he worked in the studio of Jacques-Louis David. In 1784 the two artists undertook a journey in Italy, and in 1787 Wicar began to work on the catalogue of the Florentine Grand Ducal Collections. The four volumes of drawings, which serve as a record of important works formerly in possession of the Medici Dukes, were published between 1789 and 1807. In 1797 Wicar moved permanently to Italy where he assumed a number of different posts in the Napoleonic administration. During his career various honors were bestowed upon him, among them his election in 1805 to the Accademia di San Luca in Rome which was followed later by elections to the academies in Bologna and Milan. Wicar was a celebrated history painter and portraitist and he was also an avid collector of old master drawings.