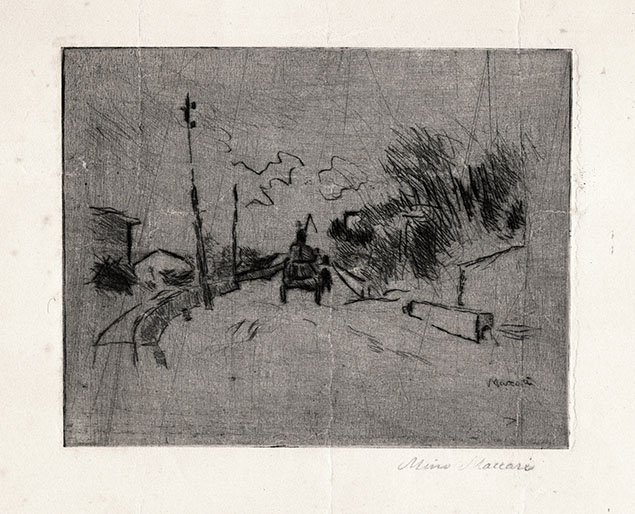 After fighting in the First World War, Maccari graduated in law. It was during these years that he first tried his hand at painting and etching. In 1924 Angelo Bencini asked him to take charge of printing Il Selvaggio, the periodical in which his first etchings were published. In 1926 he gave up his law career to take over as director of the periodical until 1942. In 1927 Maccari took part in the Second International Exhibition of Modern Etchings and in the Third Exhibition of the Tuscan Union of Art and Design. The following year he went to the XVI Venice Biennial. In the early Thirties, Maccari became editor-in-chief of the newspaper La Stampa in Turin. In 1931 he took part in the first Quadrennial in Rome (which he was to repeat in 1951 and 1955). In 1938 he was invited to the XXI Venice Biennial where he had his own exhibition room. He exhibited again at the Venice Biennial in 1948, where he was awarded the international prize for etching (which he was to win again in 1950, 1952, 1960 and 1962). At the end of the Forties he started to contribute to the magazine Il Mondo directed by Pannunzio, which he continued to do until 1963. In 1962 Maccari was appointed president of the Accademia dei Lincei; then in 1963 he held a personal exhibition in New York, and in 1967 he took part in the Mostra d’Arte Moderna in Italia 1915-1935 held in the Strozzi Palace in Florence. There followed a series of personal exhibitions and international exhibitions of graphic design, including the 1977 exhibition in Siena, where a one-man exhibition dedicated to his work was held at Palazzo Pubblico.