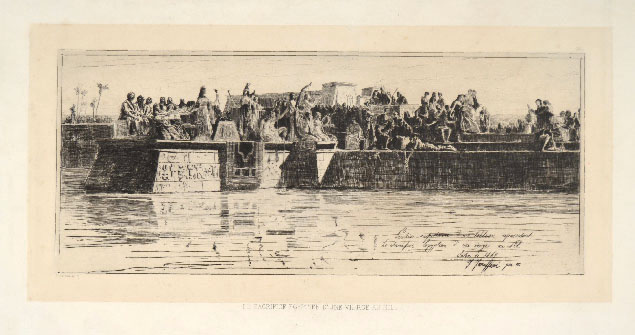 Etching and drypoint, 1867. Signed, dated and lettered with title within the image (by the artist) and below, with plate number but without the production and publication detail including addresses for the printer and publisher. A very good impression on cream chine collé on laid paper bearing the watermark HALLINES with part of a shield with letters HP (French paper produced by Dambricourt Frères).
With large margins, minimal faults, generally in very good condition. To the platemark 215 x 397 mm, the full sheet measuring 340 x 525 mm.
Etched by Faruffini in Paris, the etching reproduces, reversed, part of the painting of the same subject exhibited at the Parisian Salon in 1867. The print was included in the fifth volume of etchings produced by the Société des Aquafortistes, but apparently our impression, which does not bear the addresses of the printer and publisher, was not part of that edition.

Obliged by his father to study law at the University of Pavia, Faruffini also enrolled at the local civic school of painting, where from 1851 he studied under Trécourt and established a relationship with il Piccio. During stays in Florence and Rome he associated with Morelli, Bernardo Celentano and Francesco Saverio Altamura. He settled in Milan in 1860, beginning the most fruitful years of his career. But his family's lack of understanding and the critics' unfavourable reaction accentuated his financial and psychological problems. As a result, he left for Paris (1865-67) to find a more receptive market. There he did in fact work hard and successfully and was open to new stimuli. But his physical and psychological condition had by then been irreparably damaged. Back in Italy, his last period is marked by anguish, reflected in an uneven production. Faruffini committed suicide in 1869.