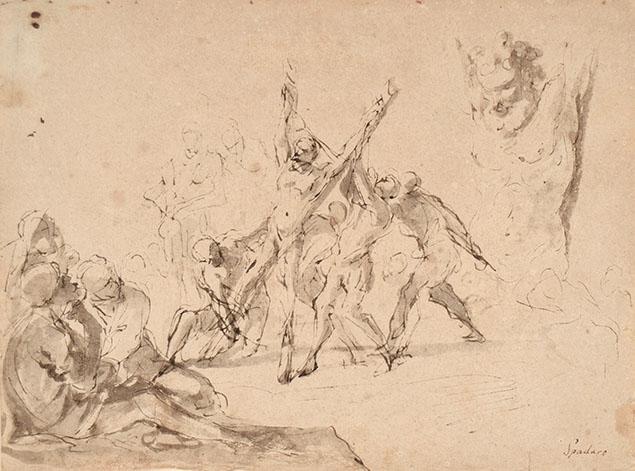 click to see a larger image
DOMENICO GARGIULO called MICCO SPADARO
(Naples 1609 - 1675)
THE MARTYRDOM OF ST. ANDREW (on top right a sketch of the hanging Marsyas)

Pen and brown ink, washed in brown. Inscribed at bottom right Spadaro. An old indication of price in pen on the verso; 199 x 250 mm. On paper with the watermark Lion rampant in oval, similar to Woodward 39 (Messina, 1590 ca.)
The drawing is unpublished. We know at least two paintings by Gargiulo with the subject of the Martyrdom of St. Andrew. One is at the Ritiro dell'Addolorata, Portici, the other one (current location unknown) was with Colnaghi, London. According to Giancarlo Sestieri (Sestieri -Daprà 1994, nos. 68 - 69 pages 168, 169, 170), both the paintings should be dated to the first half of the forties. As Giancarlo Sestieri pointed out, there are only few drawings by Spadaro directly related to pictorial compositions and this corresponds to the panorama of the Neapolitan drawing in the first half of the seventeenth century. Unlike other Italian schools, as the Florentine, in Naples there are just a few examples of strictly preparatory drawings to the painting activity. As for the graphic style of our drawing should be noted that it approaches to the examples in which the artist omits its characteristic hatching in pen, and uses only the tones of the washed ink for the definition of the chiaroscuro. Another example of this kind of graphic style was offered at Sotheby's, New York, 28 January 2015, lot 76. The sketch of the satyr at the upper right corner is certainly inspired by the ancient sculpture, specifically by the so called hanging Marsyas. We know many Roman versions of the lost Hellenistic original, which depicts the silenus Marsyas standing tied, with his arms raised, waiting to be flayed by Apollo. The most famous is probably the sculpture now in the Louvre, originally in the Borghese collection, Rome. This dramatic image surely influenced Ribera, and consequently the Neapolitan baroque painters, in the depiction of the Christian martyrs, especially, but not only, St. Bartholomew.

A prominent artist of the Neapolitan Baroque painting, Gargiulo was the son of a sword maker. This earned Domenico the nickname Micco Spadaro. His first training was in the workshop of the battle-painter Aniello Falcone, where he would have met Andrea de Lione and Salvator Rosa. The date also coincides with the brief return to Naples of Filippo Napoletano, an artist who stimulated a taste for landscape painting, an interest shared by our artist with his workshop companions. Spadaro quickly showed a talent in the depiction of the crowded city scenes which earned him the esteem of the famous Flemish merchant and collector Gaspar Roomer. Equally important in his career were the commissions from the monks of the Certosa di San Martino. Micco Spadaro also worked with Viviano Codazzi, to whose architectural paintings he added the figures.
References:
Giancarlo Sestieri, Brigitte Daprà, Domenico Gargiulo detto Micco Spadaro: paesaggista e cronista napoletano, Milan and Rome, 1994.
Brigitte Daprà, Micco Spadaro. Napoli al tempo di Masaniello, exhibition catalogue, Naples, 2002.