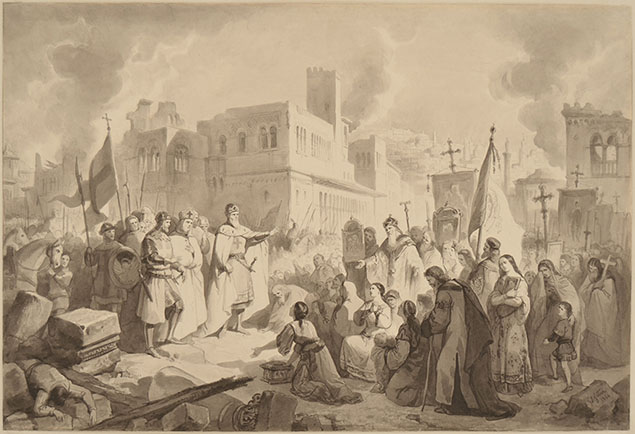 click to see a larger image
GIUSEPPE LORENZO GATTERI
(Trieste 1829 - 1884)
THE INHABITANTS OF CONSTANTINOPLE SURRENDER TO THE CRUSADERS (1204), 1860

Giuseppe Lorenzo Gatteri’s father was a well-known oil and fresco painter who had moved in 1824 to Trieste from Rivolto, in Friuli. In 1840 his father took Giuseppe Lorenzo with him to Venice, there the son became a pupil of other painters, supported by a scholarship from the municipality of Trieste. Giuseppe Lorenzo was described as a child prodigy: by the age of 11 he impressed members of the Minerva Society in Venice with his ability to improvise drawings of episodes from antiquity. Later he was well known for his drawings and paintings in the romantic historical style, including numerous book illustrations. His frescoes decorate various buildings in Trieste and surroundings. In 1842 his father took Giuseppe Lorenzo to Milan, where again he was shown off at gatherings of the elite as a child prodigy. In 1843 his father took him to Turin. He was received by King Charles Albert of Sardinia, who commissioned a series of drawings. After his return to Trieste in 1857 he illustrated several literary and historical books. In a magnificent villa on the Via Ginnastica in Trieste he painted the ceiling of one of the rooms with a fresco 5 metres (16 ft) square depicting a youthful Emperor Franz Joseph I of Austria and the Empress Elizabeth on horseback surrounded by heraldic symbols and lesser personages. Gatteri was appointed curator of the Revoltella Museum in Trieste from 1873 to 1876.