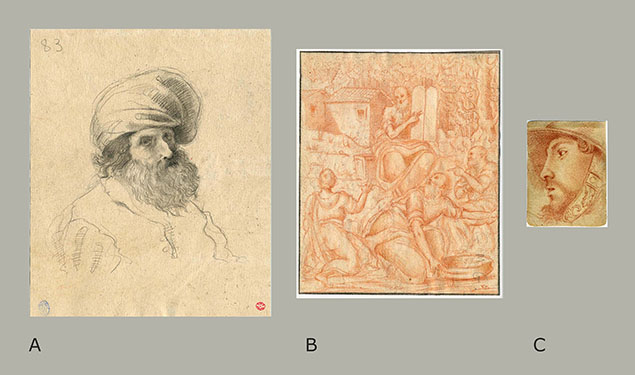 This is a personal story.
Around the mid-eighties, a broker from Rome offered me by phone three drawings. At the time I didn't own a computer and the pictures of them were sent to me by fax, in black and white.
Of the three, the first (A 178 x 147 mm, black chalk) seemed to me by a modest Guercinesque artist. The sheet bore the two collection marks of Vallardi and Prayer, quite common to see together in those times, after the dispersion of the Bernasconi collection at Christie's in London.
The second drawing (B 153 x 127 mm, red chalk) seemed as by the Cremonese school, end of the sixteenth century. Maybe a copy, for the very mechanical handling.
But the third tiny drawing (C 68 x 50, red chalk) fascinated me. Immediately it reminded me of Aniello Falcone and soon I found the images of two celebrated drawings, quite large, with similar subject; one at the Uffizi, the other at the Capodimonte Museum.
Looking for other drawings by the artist, I fell on a small group of sheets, provenance the Marquis del Carpio, kept in Madrid at the Biblioteca Nacional. A few of them were of very small dimension. This appeared to me as a sign of originality and I decided to purchase the drawings (only sold as a group) to get the Falcone. The price was modest, so I did not consider that, as the broker explained, the drawings were not his property and, if he had bought them for me, there was no right of return.

After a couple of weeks, I went to Rome and I watched at the drawings. I immediately understood that I had fallen into a trap. Previously I had only seen images in black and white, but now, seen in colors, two two collectors’ marks, on one of the drawings were in full evidence stamped with very modern inks. Later I was able to verify that the marks were obviously falsified too.
The second thing that convinced me of the scam was that drawing A and drawing B were drawn on two pieces of an identical paper (possibly French, 18th century): the trend of the rods was absolutely identical.

So, I took my three fake drawings and went back to Milan, considering my purchase a good lesson. But when, a few years later, I read the autobiography of Master Eric, I fully convinced myself that my fakes were his works.
In particular, the cunning of putting together two elements of the story of Falcone, as a draughtsman (the invention of the heads of warriors and the small format found in Madrid's drawings) seemed to me to be his signature.

Eric Hebborn was certainly the most brilliant forger of drawings by Old Masters in the twentieth century. His biographical events, with all their novelistic features, are today known to anyone involved in collecting and studying drawings. Many good sources of information about him are available on the web. The entry on him in Wikipedia is reliable, and YouTube hosts a very interesting documentary on him done in 1991, which was the period of his greatest fame, just after publishing his autobiography, a public confession as a forger, but a forger never punished by law, who mocked the entire world of art trade.
I started dealing with Old Master drawings in the late seventies, so the 'Hebborn experience' was an important part of my professional training. I read his autobiography as soon as it was published: really exciting, even though I wondered why Eric Hebborn was not in jail, whether English or Italian. Anyway, I am certainly grateful to him who, with his forgeries, helped me to understand better the original drawings.

If you need more information...