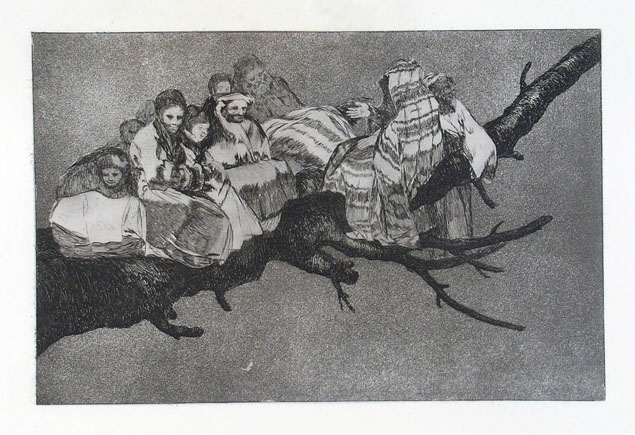 Etching, aquatint and drypoint, plate 3 from Los Proverbios (c.1816-1824); Harris 250, III, 1. A fine impression from the first edition (1864), limited to 300 copies, printed in black ink on heavy wove paper. With margins. The top area of the print has been affected by moisture, mainly on the margin. The paper has been cleaned and reinforced with a partial backing with Japanese paper. To the platemark 245 x 350 mm, the entire sheet measuring ca. 320 x 475 mm.
Of Goya's four main print series, the series of etchings known as Los Proverbios or Los Disparates, is the last and the most enigmatic of his oeuvre; these strikingly powerful etchings are full of the terror of nightmare visions. The series was published under the title Los Proverbios, although Goya's own captions for the working proofs include the word disparates, meaning follies. As a result, this print series is known by both titles. The fate of the plates after completion is only partly understood. It is known that the series originally comprised 22 plates, and these were left with Goya's son Javier upon the artist's departure from Spain, remaining hidden until Javier's death in 1854. Eighteen of them passed through two owners before coming to the Real Academia de Nobles Artes in 1862, where they were cleaned and published in a first, posthumous edition in 1864. It was at this point the proverbs were assigned. Meanwhile, the four remaining plates had made their way to Paris, where they were discovered in the early 1870s. These four were eventually published in the French periodical L'Art in 1877.