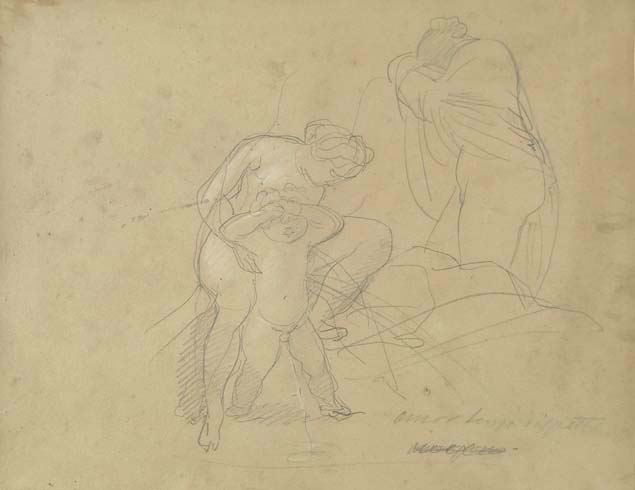 Black chalk, heightened with white, on paper light brown. Titled in black chalk amor senza rispetto; 215 x 275 mm. Pasted on a larger cardboard.
PROVENANCE: Mario Zanardi (1881-1975), his mark and inscription in pen on the back of the mount. Zanardi was a collector and a scholar of the works of Cherubino Cornienti. See Zatti, 1996, p. 33.

Born in Pavia, at twelve Cherubino Cornienti moved to Milan. There his elder brother Giuseppe, an etcher and a lithographer, enrolled him in the Brera Academy; as fellow students Cherubino met Domenico Induno and Mauro Conconi. Since 1835 Cherubino participated in the annual exhibition at the Brera and in 1843 he won a fellowship to study in Rome for three years. In Rome he attended the nude courses at the French Academy. A patriot, Cherubino Cornienti in 1848 participated in the First Italian War of Independence, fighting the Austrians in Trieste. In 1849 he was back in Rome, which he left in 1853. The last part of his career as a painter occurred in Milan and the Lombardy, with the exception of a new trip in Rome in 1857. In 1860 Cornienti was appointed Professor of Painting at the Emilian Fine Arts Academy in Bologna, but he died before the beginning of his new job. See Susanna Zatti, Cherubino Cornienti pittore, exhibition catalogue, Pavia, Castello Visconteo, 1996.