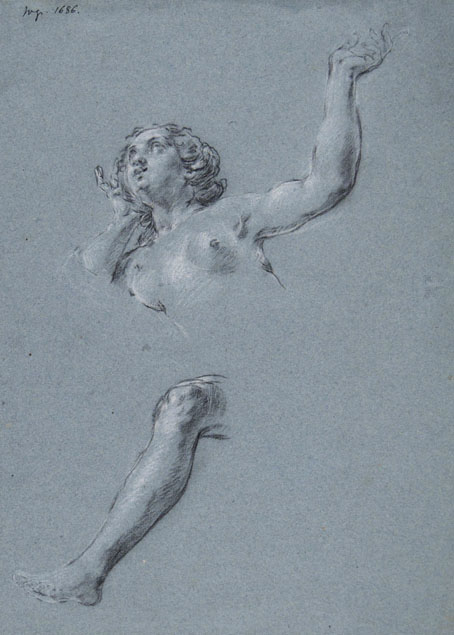 Black chalk and white heightening on blue paper. Inscribed ….1686 in black ink at the upper left. 322 x 236 mm.
Our drawing is connected to an important commission, the ceiling fresco depicting The Celebration of Aeneas in the Salon of the Armory in the royal palace in Turin, which Beaumont painted between 1738 and 1743. The sheet presented here is a preparatory study, in reverse, for the figure of the Muse seated next to the Allegory of Time in this fresco.

Claudio Francesco Beaumont was a major innovator of the Piedmontese Baroque. He was highly favored at the court of Savoy who not only financed Beaumont's apprenticeship in Rome with Francesco Trevisani but also awarded the artist with the most important commissions of the time; among them the new decorations of the royal palace in Turin, which kept him occupied for about thirty years until 1748, and the altarpieces for the Basilica of Superga (1731). In addition, the royal family bestowed upon the painter numerous honors like the prestigious knighthood of the Order of St. Mauritius and St. Lazarus.