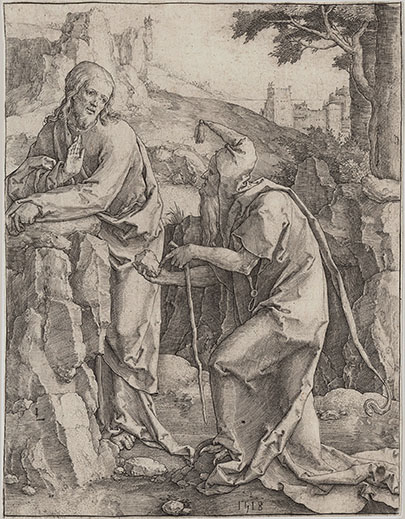 Engraving, New Holstein 41, IIa/IIb. A still good impression of the second state. The reworks of this state, as noted in the exhibition catalogue The Prints of Lucas Van Leyden & His Contemporaries, (Washington and Boston, 1983, no. 67, pp. 184, 185) "were apparently executed at an early stage in printing, as impressions of this state are of relatively good quality". In fact our impression has been pulled on paper with the watermark Two Fleurs de Lis in Crownwd Shield with pendant B, a watermark found in contemporary impressions of Durer's engravings.
Complete of the borderlines, a small spot bottom right, otherwise in very good condition; 174 x 134 mm.
A rare print.

Also called, Lucas Hugensz or Lucas Jacobsz, Leyden was a Dutch engraver and painter. He was among the first Dutch exponents of genre painting and is generally regarded as one of the finest engravers in the history of art. His father, Hughe Jacobsz, was his first teacher, followed by the mannerist painter Cornelis Engelbrechtsz. In 1515 Lucas was married in Leyden, where he worked all his life. In 1521 he traveled to Antwerp. There he met Albrecht Dürer, whose works provided the most important artistic influence on his graphic oeuvre. Lucas's engraving Mohammed and the Monk Sergius (1508) confirms Van Mander's story of his precocity. His technical mastery and compositional skill at this early age presuppose considerable training and experience as well as a formidable natural talent. It is not unlikely that, as Van Mander says, Lucas had learned his craft in the shops of a specialist in inlaying metal in weapons and of a goldsmith.The quality of his work is often compared to that of Albrecht Dürer. In addition to creating engravings, Leyden was a fine painter; some 15 works may be attributed to him with certainty.