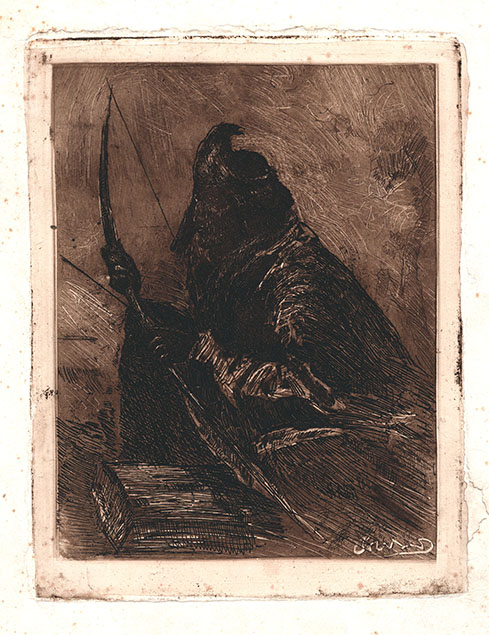 Etching, extensively worked on the layer of ink remaining on the plate before printing (acquaforte monotipata).
A fine, rich impression in brown-reddish ink. Pulled on Chine collé applied on thick and strong wove paper with watermark A. BINDA. E. C. MILANO. Indistinct inscription (signature?) in the ink tone lower right. To the platemark 272 x 209, the full sheet measuring 378 x 290.
This etching is evidently connected to the painting of the same subject executed by Feragutti Visconti during his stay in Tierra del Fuego, Argentina; see Giovanna Ginex, Adolfo Feragutti Visconti. 1850-1924, Lugano 2011, cat. No. 170, illustrated p. 188.
Another impression of the print, but not described as an etching, was published in the article by Innocenzo Cappa dedicated to Feragutti Visconti's stay in Argentina, in the October 1909 issue of the monthly Varietas.

PROVENANCE:
The painter Carlo Bellesia (Milan 1899 - 1973). At age 17, Bellesia, host of the male Orphanage of Milan (Martinitt), was hired as lithographer by Federico Marioni (Claro 1866 - Milan 1938). Marioni, himself an etcher, opened in Milan, in the last decade of the nineteenth century, a chalcographic atelier attended by many prominent artists as Conconi, Feragutti-Visconti, Russolo, Boccioni, Wildt, Grubicy, Agazzi, Ernesto Bazzaro. The activity of Bellesia at the Marioni atelier, allowed him to gather a collection of etchings by those artists.

By the age of 18 years, Feragutti enrolled at the Brera Academy of Fine Arts, where he studied under Luigi Bisi. He was attracted by the work of the Milanese Scapigliatura and was one of the first members of the circle La Famiglia Artistica. Feragutti completed his studies under the guidance of Stefano Ussi, which brought him into contact with the Tuscan Art scene. On his return to Milan, he took part unfailingly in the major national exhibitions. It was in 1883 that he produced the first of his still lifes, which were to earn him a considerable reputation in the 1890s. A portrait of his in an outdoor setting won the prestigious Prince Umberto Prize in 1891, thus launching a renewal of the traditional approach to this genre through the influence of Cesare Tallone’s work and the first photographic models. The period between 1907 and 1909 saw a stay in Patagonia, where the artist painted canvases capturing various aspects of the life of the indigenous population.