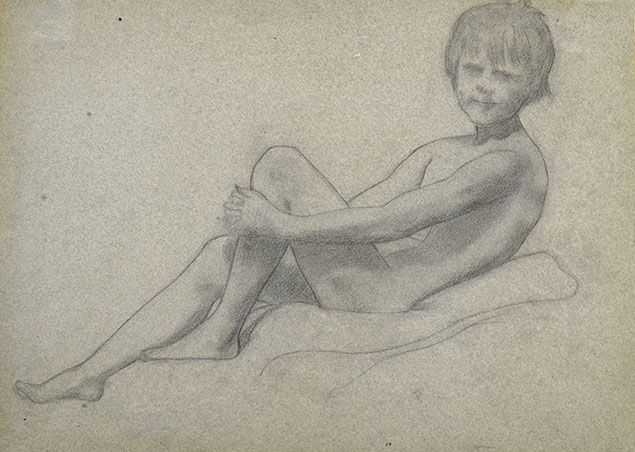 Black chalk on blue paper; 255 x 340 mm.
The close friendship between Costa and Frederic Leighton is well known. Costa replicates here a drawing of his friend, sold at Christie's in London in 2002.

Born in a wealthy family, when he was 12 Costa was introduced to the neo-classical painter Vincenzo Camuccini, who encouraged him to work from nature. Soon after was sent to the Jesuit college at Montefiascone, where remained for five years. He returned in Rome in 1843 and for two years attended the Collegio Bandinelli in the via Giulia. He then worked for short time in the studio of Camuccini before entering the schools of the Accademia di San Luca, where he studied under Francesco Coghetti, Francesco Podesti and Filippo Agricola. A committed patriot, Costa served with the Roman Legion against the Austrians in Northern Italy in 1848, joining the army of Giuseppe Garibaldi the following year in the unsuccessful defense of Rome against the French. He served as a volunteer in the war of 1859 and his enthusiasm for Italian unity was actively shown again in 1870, when he was the first to mount the breach in the assault of Rome near the Porta Pia.
Costa specialized in landscape paintings and was a particular influence on the Macchiaioli painters in Florence in the 1850’s and 1860’s. He also influenced many English artists working in Italy. In the Roman Campagna, in the early 1850’s, he met the English painters Charles Coleman, George Heming Mason and Frederic Leighton, with whom he was to become especially close. He also later became friendly with other English artists, including George Howard, Walter Crane, William Blake Richmond and Edward Burne-Jones. Costa’s studio on the Via Margutta in Rome was to become a meeting place for English painters visiting the city, and he was largely responsible for promoting the work of the Pre-Raphaelite painters in Italy. Costa made several trips to England, and exhibited at the Royal Academy in London from 1869 onwards, while in later years was invited to show his paintings at the Grosvenor Gallery and the New Gallery. He was the head of an informal group of English landscape painters working in Italy - including Richmond, Howard and Matthew Ridley Corbet - who called themselves The Etruscans, and who found inspiration in sketching trips into the Campagna, guided and encouraged by Costa. In 1882 a large exhibition of Costa’s paintings was held at the Fine Art Society in London, achieving considerable success. 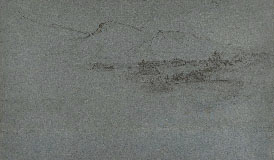