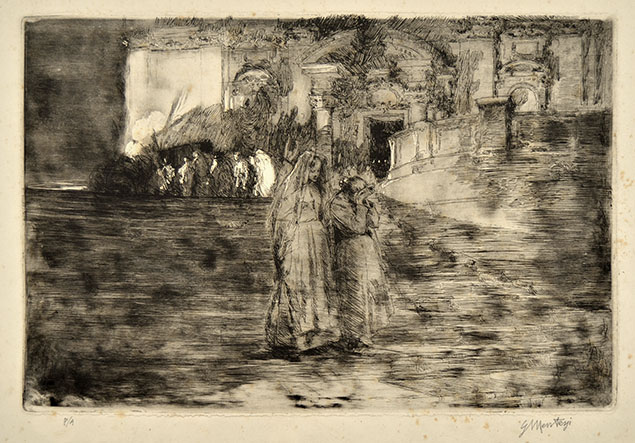 Etching, Mezzetti 360, a fine artist’s proof, richly printed with black ink, working on the surface tone with monotypic effects. Inscribed and signed in pencil on the bottom margin P/A / G Mentessi.
To the platemark 275 x 415 mm, the full sheet 446 x 618.
To appreciate the quality of our impression, a comparison can be made with a specimen of the posthumous edition, kept in the Bertarelli Library.

Born into a peasant family, Mentessi studied drawing at the Civico Ateneo in Ferrara, where Gaetano Previati was his classmate. Between 1877 and 1881 he attended the Accademia di Brera in Milan and was introduced by Previati into the circle of the Scapigliati Cesare Tallone, Leonardo Bistolfi, Emilio Longoni and the socialist lawyer Luigi Majno. In 1880 Mentessi won a prize at the Scuola di Architettura and became assistant to Luca Beltrami at the Brera, beginning a lifelong career as a teacher of architectural drawing and geometry.  During the 1980s, his fantastic streak emerged in harmony with the research of his friends Previati and Luigi Conconi. The pointillist style and social themes characterize his production in the nineties. The theme of pain and misery is taken up in the following years in works with symbolist suggestions. Gradually Mentessi developed his own manner of depicting poverty and suffering, central to which is the theme of motherhood, in either a secular or a religious context. He was a skillful etcher, strongly influenced by Conconi.