Etching and aquatint, printed in brown ink on soft laid paper. Signed and dated in the plate at bottom Gioc. Albertolli inv. E del. 1792 / Raf. Albertolli inc.
To the platemark 215 x 512 mm, the full sheet 457 x 640.
A similar large print by both the authors is in Lecco, Musei Civici. Galleria Comunale d'Arte.

Neoclassical architect Giocondo Albertolli was born on 24 July 1743  in the town of Bedano in Switzerland. He studied at Parma under a sculptor, and also in the Academy. In 1770, he travelled to Tuscany to perform the stucco decoration of the Villa del Poggio Imperiale. He then visited Rome and Naples. In 1774, he returned north to his family and soon he met up with Giuseppe Piermarini for whom he collaborated. In 1776 he was elected professor of ornamenti architettonici (architectural ornament) at the newly created Brera Academy in Milan. From 1775-1779, Piermarini erected the Royal Villa at Monza, with Albertolli providing the stucco decoration. He also labored in the Palazzo Melzi d'Eril in Milan and designed the famed lakeside Villa Melzi d'Eril in Bellagio. Albertolli was much employed in decorating palaces, churches, and public buildings in Italy, and gave a new impetus to the art of ornamental design in that country, working on designs of altars, candlesticks, chalices, and lamps for churches.  He published a number of treatises on his art. His son, Raffaello was an engraver. 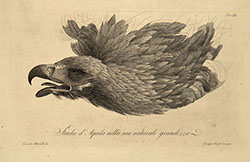