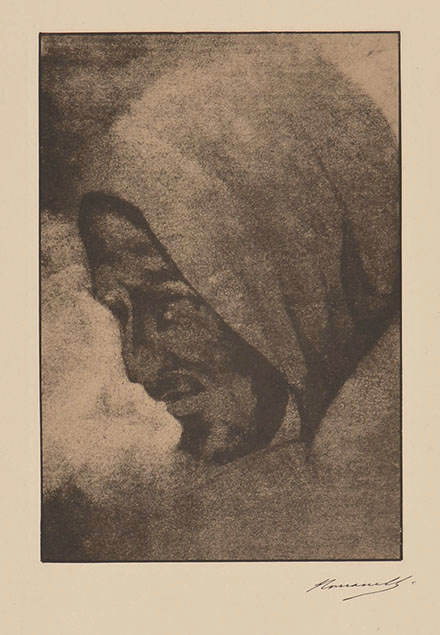 Aquatint, apparently unrecorded. Signed (?) Romanelli in pen and black ink. Stamped on the verso Acquatinta Numerata / Serie 27 N. 14 and inscribed Romanelli in pencil. At the top of the verso titled, very lightly, in red chalk, Testa di Arabo. Printed on thick and strong wove. To the platemark 228 x 159 mm; the full sheet measuring 495 x 350 mm. Full margins, in very good condition.
Heads of Arabs in profile, quite similar to the head depicted in this print, appear in the Monumento ai Caduti in Africa, executed by Romanelli in 1938.

Romano Romanelli was an Italian artist, writer and naval officer. Son and grandson of sculptors: his grandfather Pasquale had been a collaborator of Lorenzo Bartolini, his father, Raffaello Romanelli, long active abroad, was the author of works such as the Monument to Garibaldi (1895) for Siena. He was a brave fighter and patriot, as his grandfather Pasquale had been, and he was a highly decorated officer of the Italian Navy taking part in various war campaigns and in the same First World War. He studied mathematics at the University of Pisa, working in his father's workshop and in that of Domenico Trentacoste at the Academy of Fine Arts in Florence. His artistic culture is formed on the works of the early Florentine Renaissance and through the knowledge of the French art of Émile-Antoine Bourdelle, Maurice Denis and Auguste Rodin. He was named Academic of Italy on October 23, 1930. A supporter of classicism, Romanelli was a well-known portraitist and executed various monuments, including in Rome in Piazza Albania, the one to Giorgio Castriota Scanderbeg. In 1939 he executed La Giustizia di Traiano, a high relief for the Palazzo di Giustizia in Milan.
It is also renowned as a medalist.