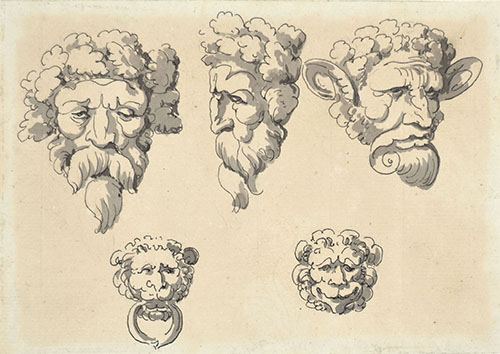 Our drawing derives from one of the magnificent sheets by Giuseppe Cades kept in the Drawings Cabinet of the Municipality of Milan (from Au. B 12 to Au. B 19)The paper is also similar. However, a direct comparison with the original drawing leads us to think that our sheet is not an autograph of Cades but rather of an artist from his close circle.

Giuseppe Cades trained at Rome's Accademia di San Luca gaining a prize in 1765 with his picture of Tobias recovering his Sight. He visited Florence in 1766, and two years later executed an altar-piece for the church of San Benedetto in Turin. When he received his first important commissions in the early 1770s, he employed a late Baroque classicist style inspired by Carlo Maratta. Around 1774, through his association with Johann Heinrich Fuseli's circle, he began adopting influences from Mannerist and Renaissance painting, as well as the antique. Although he remained in Rome throughout his career, He further expanded his artistic education by touring northern Italy. He worked on many decorative projects for Roman palazzi and villas and made easel paintings for churches and private patrons. In the 1780s, as his reputation grew, Cades became a fellow at the Accademia di San Luca, and his clients included Catherine the Great of Russia.