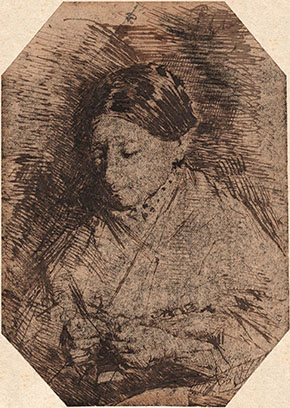 Pen and brown ink, black chalk. Cut into an octagonal shape and pasted on a cardboard, 145 x 102 mm.
PROVENANCE: the Neapolitan painter Giuseppe Casciaro (1863-1941), his stamped mark and his signature in pencil on the verso of the cardboard.

Favretto studied at the Accademia in Venice from 1864 to 1875, under Michelangelo Grigoletti and Pompeo Marino Molmenti. He soon won most of the prizes offered by the Accademia and studied deeply the Venetian masters, such as Bellini, Carpaccio, Longhi and the Tiepolos. He was deeply concerned with the colour and light of the eighteenth-century Venetian School. Favretto travelled to Paris, where, despite his studies of light, he was more interested in the work of Meissonier and Fortuny than that of the Impressionists. Considered to be one of the foremost nineteenth-century painters of Venice, Favretto infused new life into the art of that city.

16 ORIGINAL DRAWINGS COLLECTED IN AN ALBUM
Black chalk and pen
Price: 900,00 €
If you need more information...