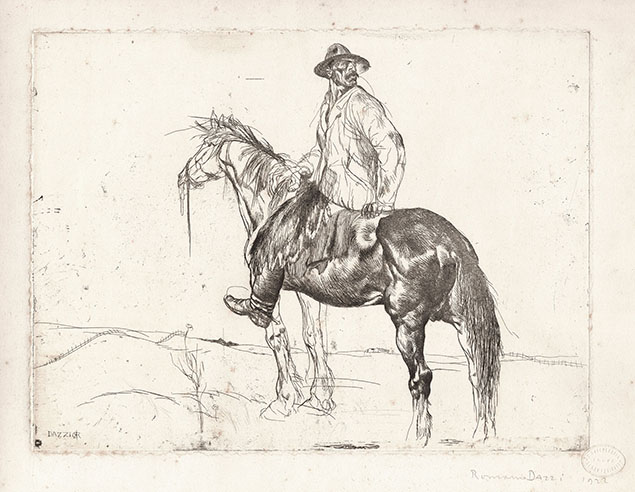 Etching, on thick wove paper; signed in the plate Dazzi R, inscribed in pencil at the bottom right corner Romano Dazzi 1922. To the platemark 248 x 330 mm, the full sheet measuring 312 nx 399 mm.
PROVENANCE: the print was pulled at the Calcografia in Rome and bears at the bottom right corner the embossed mark R. CALCOGRAFIA PROVA DI RAMI PRIVATI.
Two other specimens of the print are kept at the Istituto Nazionale per la Grafica in Rome (FN 28293, FN 28294)

The son of the famous sculptor Arturo Dazzi (1881 - 1966), Romano shows an exceptional predisposition to drawing from the very early childhood; so much so that in 1919 the Galleria d’Arte Bragaglia, in Rome, organizes an exhibition of one hundred and forty drawings by the 14 years old boy. The introduction to the catalog is written by Ugo Ojetti, one of the many illustrious family friends, who becomes a paternal mentor of the young artist.
In 1923 Romano was sent to Libya by the Italian Government, to document the military operations and to execute drawings of colonial subject. The months spent in the desert leave an indelible mark in him. The artist discovers his passion for the African world, which will remain a constant of his artistic production along with his extraordinary activity of portraitist of wild animals, which he begun in childhood at the zoo of Rome.
In 1926 Romano obtained the task of decorating the Aula Magna of the Accademia di Educazione Fisica in Rome, finishing the work in 1932. His rich production of studies of athletes, boxers and divers, earned him the prize for painting at the Berlin Olympics in 1936.
In 1987 the Gabinetto Disegni e Stampe at the Uffizi acquired a conspicuous nucleus of drawings by Romano Dazzi. Then followed other exhibitions of his drawings: in 1988 at the Galleria Carlo Virgilio, in Rome, and in 2009 at the Galleria Francesca Antonacci & Damiano Lapiccirella (Rome / Florence).