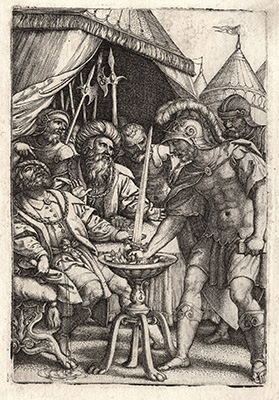 Engraving, from a series of four, depicting heroes from Roman history, c. 1535-7. Landau 82, Hollstein 126, Bartsch VIII.341.74. Signed in the plate with monogram. Very good, strong impression of the only state, with margins. Minor faults at margins, generally in very good condition.
To the platemark 115 x 79 mm.

Painter, engraver and designer of woodcuts. Nothing is known of his origins or education: he was first recorded in 1523 as a painter in the citizen's register of Nuremberg. Pencz was brought up with Bartel and Sebald Beham and was influenced by Albrecht Dürer. He was granted citizenship of Nuremberg on 8 August 1523. In January 1525 he was banished from the city, together with the Beham brothers, for his atheistic and radical statements made against the church and the authority of Nuremberg city council. After numerous appeals to have his sentence mitigated, he returned in November of the same year. It is assumed from stylistic evidence that he visited northern Italy, probably towards the end of the 1520s, and possibly Rome from 1539 to 1540. He was appointed painter to Duke Albrecht I of Saxony at Königsberg, but died en route at Leipzig. His most impressive paintings are undoubtedly his portraits, and he is well known today for some 125 small engravings, for which he is classified with the Little Masters.