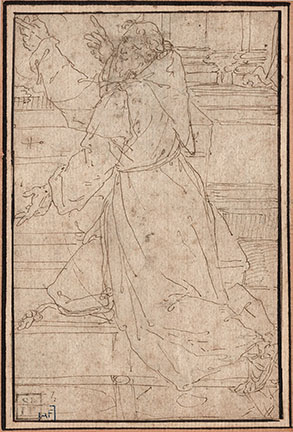 The two brothers Giovanni Battista della Rovere and Giovanni Mauro della Rovere (Milan, c. 1575; c. 1640) were known as I Fiamminghini due to the Flemish origin of their father, a native of Antwerp. The elder brother is referred to in the sources as Giovanni Battista Fiamminghino and the younger simply as Fiamminghino. They possessed an easy decorative style and worked extensively on canvas and in fresco in Lombardy, Emilia and Piedmont, almost always in collaboration. They helped to popularize late Milanese Mannerism through an expansive narrative style, rich in realistic effects, and based on highly developed and brilliant perspective skills, evident in their spectacular architectural and landscape backgrounds. Their art is indebted to 16th-century Cremonese Mannerism, especially the decorative cycles of the Campi family in S Sigismondo, Cremona, and in S Paolo converso, Milan, and to the work of Camillo Procaccini.